I don’t give too many tests in my class. They are generally at the end of each main unit: Physics, Chemistry, Astronomy etc. Since they are few and far between, I want to make sure that they are strong summitive assessments that cover a wide range of material while also going in-depth with the content. In order to do this, my tests are generally long and fairly difficult. I typically include multiple choice questions, matching, fill-in-the-blank, some type of graphing and two essay questions. The students would write on the actual test that I would hand out to them. As I am sure you have already realized– they take forever to grade. I usually spend between 6-10 hours grading them. After more than five years, I finally decided to try and come up with a solution to this. This is my solution… 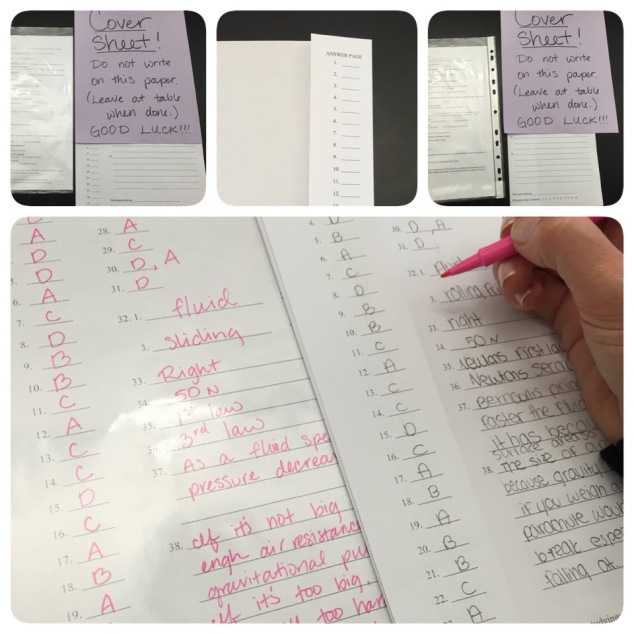 Aside from the fact that I felt I was wasting paper (my tests are typically 3 double sided pages), I knew I needed a change. I have thought of using scantrons, but I feared that they would not allow me to have the type of test I wanted.

So, I decided to come up with something similar to a scantron that matched my assessment style. I took my looooong test and squished it onto a double piece of paper (I definitely had to change the format that the test was written in). To make it easier to read, I bolded the questions to help them stand out to the students as they read through it. Because this paper was not to be written on, I put it in a clear cover sheet to protect it and also to remind them to not write on it (these clear protective sheets will also keep them in good condition so I can reuse the test next year). I would say that I spent about 30 minutes doing this (time well spent, if you ask me).  Picture below.

Then, I created an answer page for them to write all of their answers on (this was my version of the scantron). This answer page ended up being single sided and straight forward. I mainly had the spaces for the multiple choice on the left side (this way, they could fold it over when done to shield/hide their answers) and the fill in the blank, essays etc. on the right side. Picture below

Student response: My students had mixed responses. Some didn’t like it, and some did. They said that they did not like having to look between the two papers. Others said that they really liked it because it was easy to go back to questions they had skipped. They also said it seemed less intense since it was ‘just one page’.

The results: It only took me less than two hours to grade these tests! Fantastic!!!! I saved myself between 4-8 hours of grading! I would say it was a success and I plan on continuing to do this in the future.

3 thoughts on “Speed up the grading process for tests! ”